Today was a day down. I woke up pretty tired after a strange dream and when I arrived at work, I got pissed almost immediatly with something that was actually insignificant. But I just couldn’t let it go, it followed me the whole day. I had to run out of a meeting during the lunch in order to ix one thing and on my way back to the meeting, I was almost crying for nothing. Strange. I like to think that it may be caused by the femal hormones of my body, and avoid to think that I – my little person- would be that horrible people on purpose. Who knows…

I went to the gym today and ran the 6,2km from tomorrow. I had to plan it differently since the only free time to cut my hair was tomorrow night. You see: important problems on here!

Speaking of ups and downs, you get two pictures of them:

This first picture is one of the Great Smocky Mountains, a piece of the Appalachians mountains in USA. The picture is approximatively taken here. I was there with a very good friend of mine for about 4 years ago and we reached the top right on time before the night. 10 minutes later and it was all gone. It was so wonderful and all blue like that, magical. This night, we drove to Cherokee in order to sleep somewhere. It was thanksgiving and everything was closed. The only place we found to eat was a casino and it was the two of us and the all of men from the indian reserv at the corner, drinking the few money they earn at the money machine. Pathetical and tragical at the same time. 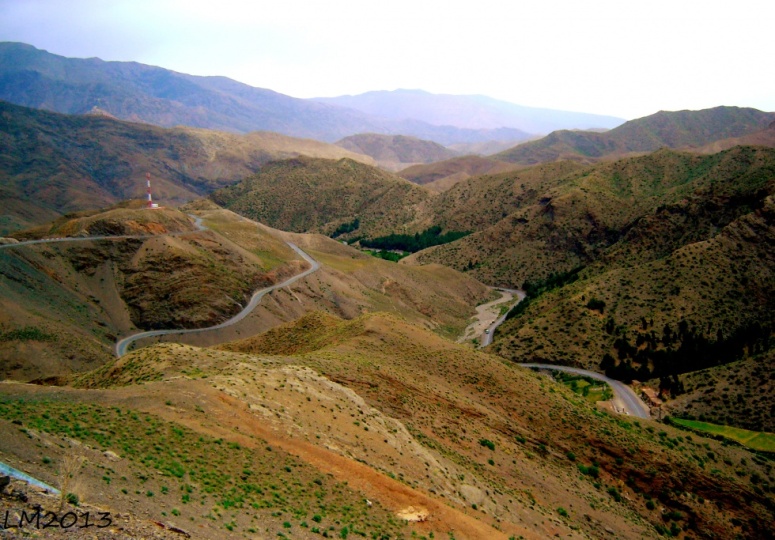 This second picture was taken on the ascension to the Tichka pass, approximatively here. It was during one of my work trip in Morocco, a winter period, when some green was on this naked moutain. I was pretty scared in the car since there were no fence of barrer but it was a wonderul landscape as well, almost lunar. Sometimes you could see a little house of stone, but you had to look good since the houses were from the same color as the soil. I learnt a lot during this three months working there.

I feel better tonight. I ate the three survivors of this picture, all alone by myself, since M is travelling to Danemark for two days at work.

They were good, with a lots of chocolate and even if it did not help me to study, it avoid me to break through. Pfuiii. Ok, some laws chapters are waiting for me, and I have a good book (big No No since I promised myself not to buy any book anymore but ok…) on my nighttable, so I feel pretty motivated. And tired.

Good night people, I will try to be in a better mood tomorrow!