To work part time is for our family a win, in several ways. We are very thankful that our employers give us the possibility to do that. I think I already wrote about it earlier, so I won’t repeat it, but recently, I discovered another win-situation.

The past week, the three of us have been sick (a cold, no more, but enough annoying…). So the days I was at home with Z, I haven’t done much to meet people, we have been a little too tired for that. But the combination of me being at home with no particular activity except taking care of Z gave me a lots of energy to rethink our possessions. Well, mine mostly. As I posted the other day, I got rid of a lots of stuffs. I also am improving my closet. I want to have only clothes that have a purpose and if possible, several.

The other day I found the opportunity to go from four items to tow. Well, it implied that I bought two new, but at the end, it’s better.

For the shoes: I bought the two pairs on the left 2011. They’ve done their part. I killed the red one and I never liked the black one (it was an offer get two for the price of one at the discount in summer). I also had a need to have a pair of confortable shoes (reading no heels) for work but not too casual as the red ones. I found these black non animal sneakers from Vagabond which made think round before I bought them, but in a positive way. The non-animal collection from Vagabond is purely made of non-animal products, even in the glue and it was an option I did not even think of before I saw the shoes.

For the trousers: I had a pair of jeasn, that I used pretty much, but which I never really liked becaue of their shape. Same story here: I got 2 for the price of one, bought prolly in 2011 or 2012. The second pair was bought 2011 and have been for some years now a bit too tight, si I never had the courage to go through the door with them on. I found a pair of jeans yesterday that fits the two needs the two others trousers were filling.

Moralities: 1) never go for two products for the price of one if it’s not something you REALLY want and need. 2) think of your real needs and try to combine more than one in one item. 3) fair alternatives are not always uggly *wink wink* 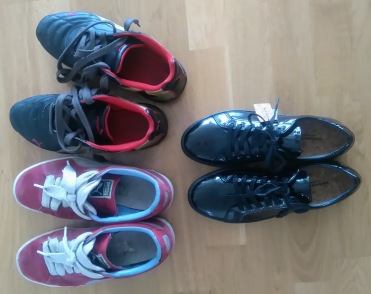